The Charter's most ambitious and visionary goals were described as follows: 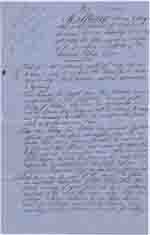 (Click to see larger view
of the original document)

'The charter was written by members of the Ballarat Reform League in 1854. It contains their passionate demands for more people in the colony of Victoria to have greater involvement in making laws in Victoria, such as having the right to vote, and to stand for parliament. The charter also stated that the administration of the goldfields and the colonys police service and justice system needed to be improved.

The charter was read out at a monster meeting on Bakery Hill, Ballarat, 11 November 1854, to around 10,000 miners and residents. The people at the meeting voted in agreement with the charter which, a few weeks later, was taken to Melbourne and presented to Governor Hotham by representatives of the Ballarat Reform League. They also asked for the release of three men held in prison on charges of burning down a Ballarat hotel. One of the Governor's clerks made a copy of the charter, and it is this clerk's copy that was kept by the Governor that we can see online now.' (Culture Victoria)

The Ballarat Reform League Charter was successfully nominated for the Australian Memory of the World Register in 2004. This four-page handwritten manifesto of democratic principles and demands was presented to Governor Hotham in November 1854.